← I has an owie! Muddlings of a one fingered typist
The new Top Ten Line Dances from the World Line Dance Newsletter are posted: 6/24/2012 →

This. That. and the Other Thang, Over Yonder

It hurts.  A lot.  I can’t use my right arm, wrist or hand until I get the wrist operated on and fixed.

Doc Jones, my surgeon, who is a cutie by the way, says that he’ll stick some screws in my arm and maybe a plate.

I figure that I’m going to get to know the TSA agents at the airport better than I ever wanted. 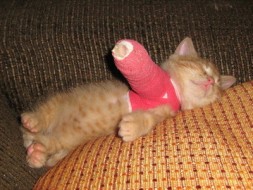 The doc says that I should be able to dance.  My dance partner and I will have to see what adjustments will be needed.

Better living through chemicals my butt!  I’m caught in an awful loop at least until I have my surgery.  I have to take the pain relievers because my wrist really hurts when I don’t.  Starts out with twinges and if I let the drugs clear my system by a couple hours say like after having over slept through meds taking time, the pain sits around a 4 0r 5 0n a 10 point scale.  When it was newly broken at the er it was at 12 on the 10 point scale.

As the drugs have built up in my system the pain only pops above a 5 if i bump the arm or like this morning when i had to rewrqp the ace bandage it was 6 – 7 for a bit as i moved it while not fully secured to the splint.

The pain pills are Hydrocodone/Acetaminophen 7.5/325mg.  I love that I’m not in pain but I’m not so crazy about some of the side effects.  I’m experiencing:

I should have an idea tomorrow after my pre-op tests how much this will cost and whether or not I qualify for financial assistance.

Wish me luck because I don’t have insurance and I certainly can’t afford to pay for it.

Dance, Fitness, Health, Work, Friends, Living, and ya gotta have a Plan and a schedule

I’ll do a longer post on this later in the week but the short version is that there is an ideal vision of what I’d like my life to look like which can be quantified into specific goals which fall into broad areas.  To achieve those goals a certain amount of work, time and energy has to be expended each and every day, week, month.

The trick is prioritizing.  I’m not going to let this setback with my wrist keep me from working toward my goals.  More on that next time.

Now the goal is to head to bed.

← I has an owie! Muddlings of a one fingered typist
The new Top Ten Line Dances from the World Line Dance Newsletter are posted: 6/24/2012 →