Ok, this is a pet peeve and I’m about to RANT just to get off my chest so I can move on….

I’ve been watching season 1 of Perception (TNT / TBS) and I’ve been enjoying every bit of it.

Good acting.  Simple plots which is what I’m in the mood for right now.  The main actor is cute.  Very cute. It’s an exercise in Fluff – Popcorn – light entertainment – generally fun stuff.  So…

but when a plot pivots on LOOKING UP SOMEONE’S LIBRARY PRIVATE LIBRARY RECORD online like you were Googling to get the number of the local pizza joint..

That’s just STUPIDITY on the part of the writers.

That is JUST GOING TO DANG FAR!

Ok, class, does anyone remember a little period in American History called “The McCarthy Hearings?” and the whole Communist Witch Hunts….   Hmmmm….????

And more recently… “The Patriot Act” — one of the most disgusting piece of legislation, examples of privacy invasion, and civil rights violations in recent history !!!!!

You know all that phone record metadata collection crap that the Govt was allowed to do… Yep.. That’s the Patriot Act — Just one little bit of it.  Stunk from day one.  The whole damned thing should be repealed!

FOR THE RECORD!!!!!!   Librarians went to COURT to PROTECT the right to privacy of their patrons in BOTH of these instances.  And we won!  BOTH TIMES!!!!!

So when you see “on TV” or in a “movie” that someone “solved the case” by seeing who read a particular book, well don’t believe it.  Some script writer who probably hasn’t been inside of a library since elementary school made it up.

If someone HACKs into the system, well that’s a different thing, but THIS WAS NOT HACKING IN THE SHOW!!!

IT WAS A HORRIBLE DISPLAY OF IGNORANCE BY THE SCRIPT WRITER!!!  Laziness.  Just lazy!

Hang on a second, let me clean off my …

BACK TO THE RANT

The only way “who has a book checked out” can be divulged is with a court order at least in the US.  I’m 99% certain its true in Canada as since the ALA and CLA recognize each other’s professional credentials (any Canadian Friends want to vet this?)

Anyway.  There.  I’m done.  It just pushed a button with me.  I was all set for a clever plot twist where the character on the show staked out the book after “setting the bait” and saw the person check it out.  WHICH WOULD HAVE BEEN WAY COOL.  And possible… (if far fetched)  but at least POSSIBLE AND PLAUSIBLE

But NO!   (OK… I’m not done yet! . . .)  — there is a big BLOB of stupid-ness from the show still stuck to the chest hairs below my left nipple…  (admit it… that image will be stuck in your head for weeks)  Is “Stupidness” a word?  It should be.  Isn’t the English language wonderful? You get to make up new words by smushing new endings on them.  Smushing is definately a word.  At least in the Southern US.

This dude on the show…  he… he…  … he just looked it up on the library’s catalog system and THERE IT WAS ON THE FRIGGIN SCREEN IN BLACK AND WHITE AND GLOWING PIXELS… Book checked out by….  !!!!!!! 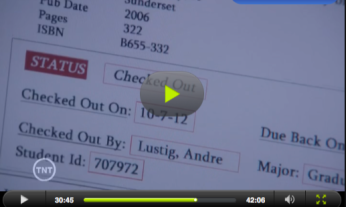 AND The ISBN is totally bogus!!!!!!  Arrrrrrgggggghhhhhhhh

ANYBODY who has actually read a book or been in a bookstore ANYTIME in the last UMPTEEN MILLION years KNOWS what an ISBN is and looks like!!!!!!

Because it is right there on the jacket or cover under the barcode.  Go look grab any book published anytime in the past 20 years.  You’ll see it.  That string of numbers following the label that says ISBN!!!!!

BUT AT LEAST MAKE The ISBN KINDA SORTA LOOK LIKE WHAT IT SHOULD LOOK LIKE!!!!!!  Use a similar pattern but  leave out a couple of digits so….  EEeeeeeeeiiiiiiiiikkkkkkkkkk!    But nope.  They didn’t They just plopped any old letters and numbers into the screen.  In there.  Let’s insult our viewers intelligence.  — Yes, some prop guy somewhere got PAID to create this crapola!   sigh

Hmmm… I wonder if the script writer is actually the SPOUSE of a Librarian and did all this deliberately to push is significant other’s buttons when they watched the show together….  Now wouldn’t THAT BE a RIOT!

Hell they should hire me to write the damned scripts.  I’m creative.  I can write.  And hey, here’s a thought, I know how to LOOK UP STUFF before I put it in A FRIGGIN SCRIPT!!!!!!! And spend oodles and oodles of producer’s money to ….  Arrrrrggggghhhh!!!!  well I think you’ve gotten the point.

I could live with the ISBN thing… Honestly, I could.

BUT Patron information is not REPEAT NOT!!!!!!!!  displayed to the public and NOT given out without a court orde!.  This is something we librarians take very seriously and is a point of professional pride.

You may wonder why I’m posting on my blog.  Because TNT does not have a contact form on their website.  Nor does TBS, Nor does Turner.  Ugh.

Note to TNT, TBS & Turner:  Send your script writers to school!  Make them actually VISIT a library.  Check out a book maybe.

You may now resume your normally scheduled Internet Surfing.

P.S.  I almost posted a link to this blog post on the Perception Website but I don’t think they’d get my sense of humor…  LOL

(even if it really did PUSH MY BUTTONS, I can laugh at myself for my reaction.  I mean hey, I literally sat up and “BULLSHIT” burst forth from my lips so it was a BIG REACTION.)

But I’m a big fella; I can move past this.