I’m Proud to be an American 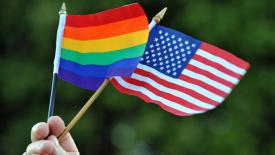 Do you have any idea how long it has been since I’ve been able to say those words?  Too long.

Too long because I am a gay man who has been told for all of his 52 years by the country where I am a citizen that I am not worthy of the same rights that my fellow citizens enjoy.

Too long because under the law I had not been worthy of equality.

Well today I am.

The President says it beautifully:

I am proud that this man is our President.  He is the kind of leader that all of our government officials should strive to emulate, demonstrating time after time unwavering resolve to work for all the citizens he represents and doing so with style, elegance, eloquence and dignity.

I wish we did not have a constitutional term limit on Presidents.  I am proud that I voted for this man four times: in both presidential primaries and in both national elections and I would vote for him again.

Tears of joy, happiness, and relief 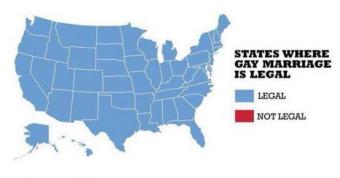 Listening to President Obama speak, I broke down into tears.  Literally.  I had to pause the video because the image was going all blurry.

Even as I type this I feel them welling up again in my eyes.  Tears of joy.  Tears of happiness. Tears of relief.

Unless you’ve been a part of a minority and denied your rights you may be able to empathize but you’ll never be able to fully understand what today’s decision means to LGBT people.

Tears of joy are a rare thing.  I’ve only done it once before, when I and my dance partner won the World Championship in Couples Country Western Dance.  Today marks occasion number two.

But joy it is.

Dear Canada, I won’t be applying for political asylum 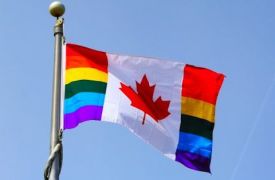 Seriously.  If the Supreme Court had not upheld gay marriage, I would have tried to move to Canada.

Although I realize it would not have been practical nor would it have likely happened, the thought of moving to Canada and becoming a Canadian Citizen more than once has crossed my mind.

Why would I want to stay in a country where the government says “You are not entitled to the same rights that other citizens get?”

Just for the record… I am 100% open to a Cute Canadian Fella sweeping me off my feet and asking me to marry him!  I’d move with you back up north!  Woo Hoo!

From a practical stand point, nothing changes for me, not immediately, and not in my daily life.

However, dozens of my friends though are now free to be married.  Dozens more who already are married now are married in all 50 states.

But most of all, from an emotional and psychological and social stand point, EVERYTHING is now different.  Because now my country says that I am entitled to the same rights as every other citizen.  That is a world changing thing.  Yes indeed

Hmmm why do I feel like that cartoon character in Roger Rabbit that screeches “A Maaaaaannnnn!!!!”?

So, everyone is officially invited to join the “Find Tony a Husband Squad”  — It will be cool.  We’ll get t-shirts made up and everything.  😉

Sadly, the grumbling has already started. There is already, and there will be more ranting and raving about this, from people who feel threatened.

Some of them (like the Governor of Texas – SHAME ON YOU!) should know better.  Check out his disgusting display in this press release: http://gov.texas.gov/news/press-release/21131  I’ve already called and emailed his office to voice my opinion.  If you are a Texas resident I invite you to do the same.  Here are the contact info:  https://gov.texas.gov/contact/

For those with legitimate well meaning questions and/or concerns about “How does this affect me?” well I point you to this factual, if tongue in cheek, post:

which sums things up quite nicely.

Life is good.  Today is an amazing day.  I feel transcendent.