“The Fat Trap” NYT Article — A proverbial fire under my butt

The last week of July, this year, I ran across an article…

…and it created an explosion in my head.

It was the proverbial match thrown onto a powder keg.

It was the key for a lock.

It was the AAA battery needed to make the toy work on Christmas morning.

It was the catalyst needed to make the chemical solution crystallize.

It was the final piece of the puzzle.

It was a trigger, the “thing” that got me moving again.  It was an epiphany.

Simply put, and all cliches aside, it was exactly what I needed to read at exactly the right moment.

Those few bits of new information put everything into perspective — suddenly everything just clicked into place.  I knew how I could move forward and succeed this time where so many times before I had tried and failed.

I have no idea what I was looking for when I found this article.  Seriously!  But something made me click on the link.  I am very glad I did.

I began reading the article and after only two paragraphs, I bookmarked it because I knew I wanted to come back, re-read it, then blog about the information presented in the article.

I want you to read the original article, of course, but I also want to talk about the impact it had on me, bit by bit.  (which is sure to be amusing, or at the very least, entertaining… LOL)

Why several small posts over the next few days? I hear the teeming masses ask?

Well as you fine folks who follow my blog on a regular basis know by now…  I have a problem with brevity.

Ok you guys, mMy closest friends included.. you can stop laughing.  Stop.  Now!  Ok, the adults among us will move on while those silly creatures who are pretending to be my friends take a moment to control themselves.  Shameful.  Just shameful… The rest of us shall ignore them…

My reaction to this article was HUGE!  It will take a bit of verbiage to convey just how huge it was and that, dear readers, friends and the oddball cousin or two, does not mean “brief”.

Yes, I do know what the word means, I simply choose to not utilize that knowledge.  grin

By TARA PARKER-POPE
Published: December 28, 2011 as a feature article in the New York Times Magazine
I highly encourage you to read the full article, it is very well written.

Ah,  I see that my *ahem* friends have gotten themselves under control and caught their breath; we shall proceed…  😉

Alternating Excerpts and my comments…

What I’m going to do is go through the article and pull out excepts from it which:

then provide my own unique take on the excerpted tidbit. — Think of me as the “color announcer” at a sporting event.  😉

I’ve read a LOT about weight loss and fitness over the years.  I am sometimes amazed by how much I know.  Enough to write my own fitness book, (which if everything works out as planned is exactly will happen at the end of this process.  — I’d better have a good editor…. LOL)

BUT in all my reading I’ve never seen anyone explain WHY people regain the weight.  And that, friends, neighbors, and the dozen people who read this blog, has always puzzled me… …a LOT!  In fact, I’ve never even read an article where the question was ASKED!

After all, it isn’t like a person spends oodles of effort to get fit/lose weight, then decides to toss away all that hard work and get UN-fit on purpose!

So when I saw the quote from this scientist in the article, I literally said aloud: “It’s about time!” 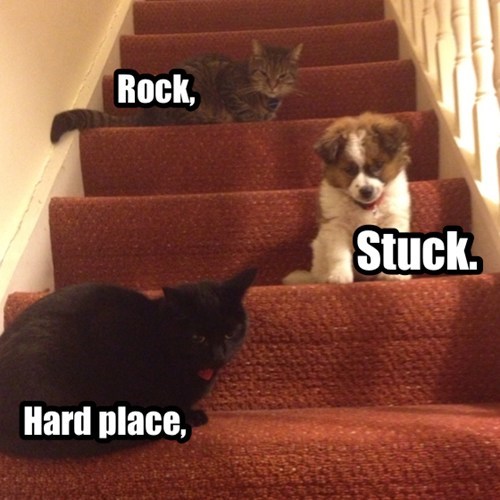 “It has always seemed strange to me,” says [Joseph] Proietto, who is a physician at the University of Melbourne. “These are people who are very motivated to lose weight, who achieve weight loss most of the time without too much trouble and yet, inevitably, gradually, they regain the weight.”

FINALLY!  A doctor, a researcher, is asking the question to which I want to know the answer!!!!!  Dude I know how to lose weight.  I’ve LOST weight more than I can count!  What I want to know is “Why does it keep coming back?”

After a year, the patients [in the study] already had regained an average of 11 of the pounds they struggled so hard to lose. They also reported feeling far more hungry and preoccupied with food than before they lost the weight.

But it was nice to see how I feel and my experiences being reported and supported by actual scientific research.  It was vindication.  I’m not alone.  You’re not alone.  We are NOT nuts.  This doctor/scientist dude is studying what us fat-folk have known for ages!  He explained that folks who lost weight had:

A cocktail of… …hormones associated with hunger and metabolism all remained significantly changed compared to pre-dieting levels.

It was almost as if weight loss had put their bodies into a unique metabolic state, a sort of post-dieting syndrome that set them apart from people who hadn’t tried to lose weight in the first place.

“What we see here is a coordinated defense mechanism with multiple components all directed toward making us put on weight,” Proietto says. “This, I think, explains the high failure rate in obesity treatment.”

At this point, I checked the date on the article.  2011.  Where the heck had this information been hiding?  Why hadn’t I heard about this before?  Sheesh!

This is HUGE!  I literally grabbed a post-it and a marker and made myself a note to see what kind of follow up studies on this have been done since this research released his findings (see citation at the bottom of this post)  I haven’t done it yet but when I do I’ll blog about it.  Promise!

Getting Fit is Hard!  Staying Fit is Almost Impossible!

Not too long ago, here on my blog, I went on something of a huge pity party, writing at some length, in an attempt to describe just how friggin’ hard it is to lose weight and exercise when you’re as out of shape and obese as I am.

This excerpt from the article helps to explain a little bit of WHY it is so hard.  Can we say VINDICATION !  ? !

Lets say it all together class.  “Vindication”   Oh, how sweet it is!

Knowing that what I have been feeling and what I’m experiencing is supported by scientific research doesn’t make the job ahead of me any easier, but it does make the task more understandable and it absolutely makes it more manageable.

The feeling I experienced when I read that bit of the article is kind of like that “sense of relief” you get when you’ve had some sort of undiagnosed ailment that nags and gnaws at you and won’t go away.  Then finally you “give up” and go to the doctor about it and the Doc says “Oh my, you have XYZ syndrome” and reaches for the prescription pad.

But, even if the Doc can’t do anything about it, you feel better somehow, just by putting a name to what it is that is bugging you.  You feel relieved that you were not imaging it.  It is real.  It exists.  There is scientific evidence to support and describe what it is that you’re going through.

This doctor continues by saying:

For years, the advice to the overweight and obese has been that we simply need to eat less and exercise more. While there is truth to this guidance, it fails to take into account that the human body continues to fight against weight loss long after dieting has stopped. This translates into a sobering reality: once we become fat, most of us, despite our best efforts, will probably stay fat.

See!  A scientist agrees: It is NOT SIMPLE!  And, yes, it is a “sobering reality” indeed.

Stay tuned folks, the news is not completely 100% bad though.

.. More excerpts and commentary on the article tomorrow (Sunday).