Part 3 in a series discussing The Fat Trap

and it triggered something of a landslide of reaction and comments from me – more than would fit comfortably into a single post.

This blog post you are reading now is part THREE of my extended commentary on this most awesome article.

Keep reading if you like but things will make more sense if you jump back and read part one of the series:

“The Fat Trap” NYT Article — A proverbial fire under my butt

Then you should read part two

So, if you’ve read parts one & two, then Welcome Back!  This is the final post in the series.

if you’ve not read parts 1 & 2 but you enjoy reading the end of mystery novels first, then keep reading

Either way… here we go!

People actually do succeed – Not many – but a few have managed to do it.

The thing that made this article different from others that I’ve read is that the author talked about some people who have managed to beat the odds.  They did it.  They lost the weight, got fit and MANAGED TO KEEP THE WEIGHT OFF AND STAY FIT!

In fact, there is even a registry for people who have managed to succeed set up by Dr. Rena R. Wing and Dr. James O. Hill

The National Weight Control Registry tracks 10,000 people who have lost weight and have kept it off. “We [Dr. Wing & Dr. Hill] set it up in response to comments that nobody ever succeeds at weight loss,” … … “We had two goals: to prove there were people who did, and to try to learn from them about what they do to achieve this long-term weight loss.”

Hyper-Vigilance is the answer

The New York Times (NYT) article shares the “answer” to success.  Unfortunately “the answer” is not an easy answer:

“You find these people [who succeed] are incredibly vigilant about maintaining their weight. Years later they are paying attention to every calorie, spending an hour a day on exercise. They never don’t think about their weight.”

Did you catch that?

Before, in my life, I’ve gone into weight loss programs with the vague idea that dietary changes need to continue past the point where I’ve achieved the fitness or weight loss goals.  Programs like Jenny Craig even have a “maintenance” element built into them.

But never before had the odds of success been laid out for me so clearly and so simply, right next to the REASON why success is so hard.

And NEVER, had anything I’d ever read talked seriously about what people who DO succeed actually have to do to maintain their new slimmer fitter bodies!

Just in case you missed the important bit… here it is again with emphasis added by Moí:

They NEVER don’t think about their weight!

NEVER – EVER!  Here is where the NYT article really comes into its own. This section of the article, is by far the longest part and if I’ve already mentioned it, well it bears repeating: The Fat Trap is extremely well written. Be sure to read it in its entirety

Often in news reporting, the reporter keeps himself or in this case, herself out of the story. But this story is different, after consulting with her editor, she chooses to share her own reaction to what she is discovering and her own struggles to lose weight and keep it off.

In this section of the article, she not only shares the extreme regimen that people who beat the odds and succeed at staying fit maintain, she confesses that she wonders if she has what it takes to accomplish something similar.

BAM!  The neurons in my brain lit up like the skies over Washington on the Fourth of July

There is a solution.

Not an easy one.

Not one that will work for everyone.

But there IS an answer.  It can be duplicated.

And in that instant I KNEW THAT I HAD THE SKILLS TO PULL IT OFF!

[ cue the fanfare and send up the barrage of fireworks! ] 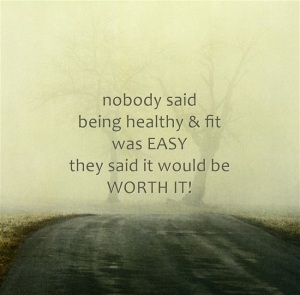 So, let’s recap the info in the Fat Trap article so far:

I’m a very visual person.  I swear that I “think” in pictures most of the time.

As I read the stories of the people who had kept themselves fit and healthy and the almost monk-like dedication to doing so, I had a series of images flash across my brain:

First: — A mini-movie of an AA meeting:

Then I had an image of an Olympic gymnast training for his run for the gold go tumbling across the movie screen of my brain.

Yes, there is a connection.   Stay with me…

So, I ask you dearest readers,  “What do a recovering drug addict, a recovering alcoholic, an world-class athlete and a person managing their diabetes with a daily injection all have in common?  And no this is not the set up for a bad joke!

Answer:  They have something in their life which DEMANDS hyper-vigilance.

A recovering addict can never chance taking that first hit or that first drink because the negative impact on their lives is too great.  Ditto for the diabetic.  Stop taking the daily insulin shot and bad things happen to them.

The world-class or pro athlete is in a similar boat: either they pay constant attention to everything that affects their performance or they run the risk of losing the gold medal or the pro contract.

All of these people “find a way” bit by bit, step by step, day by day to adjust their lives so that this “thing” is managed and they lead the life they choose.

I choose to be healthy, happy and to dance.

My life is changing for the better.  There is no magic “I’ve made it date.”  There are milestones, yes, but the Journey itself, IS the destination.

It will happen tiny bit by bit.  Step by step.  By making progress and not seeking perfection.

By focusing on being healthy, not on losing weight.  By focusing on objectives, not goals.  By living a life where there is no need to “go exercise” as a separate activity because I’ve made movement an integral part of my life.  Every calorie consumed is tracked and every erg burned is monitored.  And every action, every choice is evaluated for its positive or negative impact on my health and fitness.  And this will take time.  And it will never stop.

Why? Because, just as it is with a recovering alcoholic, the alternative is simply not an option.  It is as if I have become a “recovering” fat person.

Re-building one’s life from the ground up… one tiny step at a time.

What I realized when I read the article is that NOTHING, no single thing, not the tiniest detail is going to remain the same from “before.”

EVERYTHING is going to be affected by this. EVERYTHING has to be examined.  If it supports a healthy fit lifestyle then it stays.  If it doesn’t it goes.

Ok, class the word of the day is “Ruthless”  Can anyone use it in a sentence?

And as I go through the process I’ll share it all with you. Who knows, maybe someday all this will turn into a book and I’ll be famous and be on the talk show and seminar circuit. Woot!

You guys laugh, but hey envisioning myself on Oprah gets me through the day.  It’s my fantasy, I can wallow in it if I like! Woot!

The article in the NYT Magazine provided the catalyst that I needed to bring all the experience and knowledge I have about fitness, and diet, and health together.

The last three years I’ve felt as if bit by bit my life was being deconstructed.  Now, in a very weird kind of way, I’m glad.  Because it puts me in a spot where I can rebuild.

I feel as if  my life is a house I just stripped down to its bare bones — with nothing remaining but just the 2×4 frame and the cracked foundation.  And I’m remodeling it, re-building it from the foundation up, one board, one brick, one nail at a time.

Someone coming along in 14-15 months from now might have to do a double take or three to recognize the place; but recognize it they will because it will both be the same and different simultaneously.

The kernel of truth in this analogy is: while the place is a mess and the remodel is ongoing, pretty much everything is focused on the construction task at hand, and then when the “remodel” is done, the day to day living gets started, but since it is an old house regular maintenance will be required.

See ya on the dance floor!  (with my tool belt…Woot!)