Trauma, Drama, and challenges this week… …wish me success! 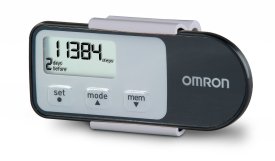 I can’t find my Omron Pedometer.  It is gone.  And I’ve gotten used to wearing it every day.

In fact is now part of my “morning routine” to put it on.  Which is a problem.  What I’m doing in this “Journey to Health & Fitness” is one, by one, setting up good habits, rituals, routines, replacing old patterns of behavior with new, better ones.

And to do that requires repetition.  Lots of repetition.  And until the “new” becomes “habit” and the “habit” becomes ironclad rock solid do-it-without-thinking-about-what-you-are-doing type behavior, any deviation can be deadly and devastating.

I’ve even canvased the neighborhood (literally) — I went out on my balcony and the bridge that crosses the court yard and looked at the sidewalk and the stairs to see if I could see it lying there.

BUT IT bugs the crap out me that I am not wearing it!

Recording that little number into the spreadsheet each morning from the day before was an act of validation.  It is/was actual numerical quantifiable proof that I was indeed MOVING my body!

I have this wonderful Doctor: Karen King

Unfortunately I was not able to choose her as my Primary Care Physician when I got insurance this year through the absolutely WONDERFUL implementation of the Affordable Care and Patient Protection Act.  (Read my blog post about it here)

Why? I hear the teeming masses asking…

Well, because Blue Cross Blue Shield of Texas is a nincompoop of a company.  I thought I was choosing a plan from them that included my preferred doctor.  It turns out that I wasn’t and the source of the confusion is a direct result of incomplete / unclear information on the BCBS website.

I served for three years on the Insurance Selection Committee at my last job so I am operating from a base of experience and knowledge when it comes to the ins and outs of health and dental insurance policies, selecting them and understanding how they work.  I did my bit.  I looked, I read.  I choose. THEN BCBS says “oops our bad” your doctor isn’t on the list.   And of course it was past the open enrollment period so I was stuck on the plan and had to go with the “best of the rest”

Let me make this clear:  My personal experience is:

So… what does all this have to do with the price of Tea in China? 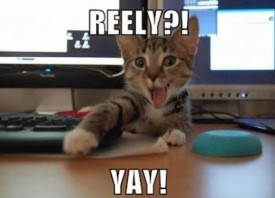 Well, friends, neighbors, faithful readers, and the odd cousin or two (and my Mom… who just started reading my blog)… Well, I got some GREAT NEWS this week which, because that is the way these things work, will overflow into next week:

Challenges on the Fitness Front this coming week:

This is going to be a challenging week on the fitness front.  I’ve got several ongoing activities which I wish to continue and there are three new ones that need me to pay some attention to them:

So there you have it.  An overview of this week’s destinations on my “Journey to Health & Fitness”

While I was typing this, I took a short break to fold some laundry which I did yesterday (towels and sheets) and TAH-DAH!

My Omron pedometer was in the basket of laundry mixed in with the sheets.

I feel MUCH better!   Woot!

All is right in the world!