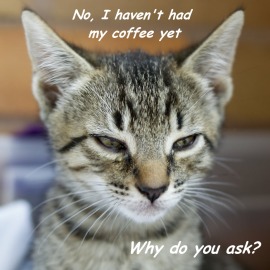 Well, I’m up and eating breakfast;  have I mentioned yet that I am NOT a morning person.  🙂

I survived Day 1 on Jenny Craig.  Actually I was very surprised by the amount of food that I ate yesterday.  I wasn’t ever “hungry”.

In fact there were two things on the menu I didn’t eat simply because I wasn’t hungry.  A cup of soup and 1 small apple ended up in the “not eaten” column.

Who knew there were so many Fruits and Vegetables?!?!!!! 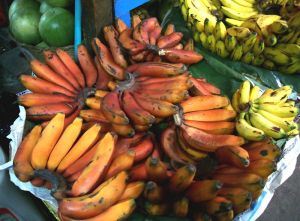 When I went shopping on Sunday for the veggies and fresh fruit, I decided to expand my horizons and try out different fruits and veggies that I’ve never tried before.  I shop at Whole Foods Market which is a little bit pricier than Kroger BUT shopping there makes me feel good about myself which makes the extra money well worth it.

Anyway, I bought a lot of fruits that I’ve never tried and will be experimenting with them.  This morning I tried out the “Red Banana“.  The final vote is still out but I don’t think I like it.  The flavor is definitely different from the yellow Cavendish banana that most Americans see in their supermarket.  I’ll give it another shot later in the week just to be sure but the first go didn’t bowl me over.

My “exercise” for yesterday was an hour and a half practice with my FAB-U-LUS dance partner Donna.  We had a good practice.  I think we’re going to do very very well this year.  We’re learning lots of new things and if we can get them to show up in our routines then we will kick some serious booty on the dance floor!  🙂  I’m very lucky to have her as a dance partner. 🙂

I’m “cheating” on the plan.  *GASP*  only the second day and I’m cheating?!!!  Well, it was actually the 1st day.  I’m cheating in TWO ways.  One is temporary.  The other is permanent and there is no way I’m gonna change.  It’s a very small cheat so I don’t think it will affect my progress a huge amount.

Cheat # 1 — the “temporary” one:  I’m supposed to be using non-fat milk on the Jenny Craig “plan”.  Well I love milk.  I’ve been drinking Organic 2% milk for a long time.  The organic milk is much better tasting than the “regular” milk.  And 2% is a better choice than “whole milk”.  So this week, I bought 1% milk instead of non-fat.  I’m blending that with the remaining 2% milk in my frig because I just can’t bear to throw away perfectly good food.  Next week the “cheat” will be smaller because I’ll buy a half gallon of 1% and half gallon of non-fat and “blend” the two.  The third week on Jenny Craig, I’ll make the switch to Non-Fat milk.  All organic of course.

Cheat #2 — the “permanent” one:  Jenny Craig has a menu that you’re supposed to follow.  And if you get “hungry” they have a very long list of “Unlimited Free Foods” which are all very low calorie and have a large “volumetrics” factor.  Which is just another way of saying “it fills up your tummy without filling up your fat cells.”  There is also a much shorter list of “Limited Foods.”  You can have three of the ones on this list per day.  For example, non-dairy creamer is on the list.  With my morning coffee my “non-dairy” creamer is Silk Soy Creamer.

I use the French Vanilla Flavor.  It is DEEEE-LIS-SHUSH!  And there ani’t no way I’m giving it up.  Even if it is higher in fat that my Jenny Craig “coach” would like me to use.  I figure it is a good trade off because the non-fat non-dairy creamer that I would be using on the plan would require me to put so much of the gunk in my coffee that the amount of calories would end up being the same.  And I’m only putting in a couple table spoons of the Silk Creamer.  So there!  In the grand scheme of “cheats” this isn’t a big one.

Ok friends, family and anonymous Internet folks…. time for me to move on to the next item in my morning routine… make the bed and gather the stuff I need for today’s lunches and snacks.