Dancing may be fun but it isn’t always exercise…

I have had this article idea for a while now which I planned to do here on my blog.  The idea was to talk about how dancing, while fun, isn’t always exercise.

When you “exercise” you basically have to get your heart and lungs and muscles exerting enough effort so that the body is “stressed.” We’re talking “good stress” here.  Because when the body is stressed, in a good way, the body responds by becoming stronger.

And that is how you get healthier!  Tah-Da!

Unfortunately, when you are in the studio practicing different dance techniques, your body is not always being stressed.  You end up doing the same movement over and over again which can increase flexibility, agility, and muscle control, but it is NOT stressing the cardiovascular system.

So, this idea for an article has been dancing around in my head for a while (pardon the pun).  I was going to go on for a bit with my usual drama. *GASP*  Do I hear my dearest readers crying out “Tony?  Engage in Dra–MA?!  Him?”

Anyway, before the inner audience in my head so rudely interrupted me … 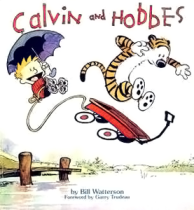 Calvin & Hobbes Cartoon?   You know the ones I’m talking about where he is about to engage in some activity like falling down the stairs, and the cut away shows all these little Calvin’s inside his head moving all these controls…

But I digress…  (Yes, that is really the way my brain works.  All the time. I think in imagery  I usually keep it to myself though. ) Squirrel!

Then Squidoo issued a challenge:

A New Article on Squidoo.com 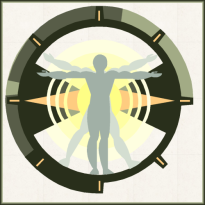 Every once in a while on Squidoo, the “editors” of the online magazine site issue a challenge.

And sometimes they issue a “challenge” (they call them “Quests”) based on a new feature they are introducing on the website.

In this case they have created a new “webpage design theme” using camouflage coloring — different shades of green.

And a textured background that is mostly white with specks.  It kinda looks like rough linen. (see the image to the just below).

You can click on it to enlarge it if you want.

I put a border around it to make it more visible here on this blog.

On the Squidoo post, of course, it repeats as a background pattern/texture.

Here is a crop of my post on Squidoo so you can get an idea of what the whole thing looks like when all put together: 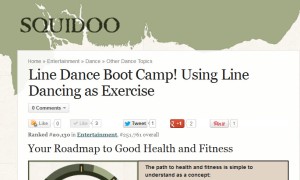 The main reason to do one of these “Quests” is that when you do, your lens, what Squidoo calls an article, is more likely to be (a) featured on the front page of Squidoo (b) that the editors might notice it and choose it for “Lens of the Day” (c) that the lens might win a coveted Purple Star, a symbol of excellence.

All three of these things result in the lens being highly promoted within the Squidoo website which produces more page hits, eyeballs on the article, page views, increases click-through rates,  increases the likelihood of potential sales, and most importantly, increases the amount of ad revenue that Squidoo shares with its authors.

The “Author” in this case would be this here little ol’ cowboy who is currently unemployed and who recently broke his wrist and is facing $20,000 in medical bills and attempting to make money by becoming a writer online. That would be:

Your very own TxCowboyDancer, as it were.

The title “Line Dance Boot Camp” popped into my head when I saw the camouflage design and the article pretty much wrote itself at that point.

What took a while was finding graphics that went with the color scheme of the new design and tied into the whole Map/Camouflage concept.

I had to do some searching and then some editing: adding borders, changing colors in the image, etc.  I ended up using all images from the Public Domain (US Govt images) and from Microsoft Clip Art which was kinda nice because I didn’t have to put image credits on the page.  Whew!

I created the Camouflage page divider from scratch which I think turned out pretty good ifin’ I do say so myself!

So I hope you hop over to Squidoo and enjoy the article and I hope that some background here about the creative process will make the article more interesting for you!

See ya on the Dance Floor!